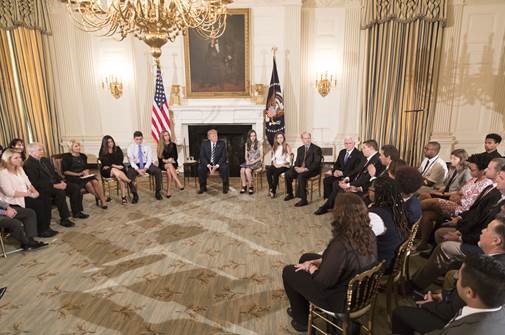 A Trump supporter whose daughter was one of those who was brutally murdered in the Florida High School shooting last week has spoken out about his daughter’s death, and stood staring at President Trump during a recent listening session which the President held.

Andrew Pollack who’s daughter Meadow was just 18 years old has spoken out following his daughter’s savage murder, and told reporters that he is ‘pissed ‘

“My daughter has no voice. She was murdered last week, shot nine times on the third floor.. This shouldn’t happen. We go to the airport, I can’t get on the plane with a bottle of water but we leave some animals to walk into a classroom and shoot”

The grieving father went on to say:”It should’ve been one school shooting and we should’ve fixed it,” he went on to say. “And I’m pissed. It’s my daughter I’m not going to see again. We protect airports, we protect concerts, stadiums, embassies, the Department of Education that I walked in today that has a security guard in the elevator. How do you think that makes me feel?

Regardless of what your feeling are on the President, it was a very tough day for him to go through and there was of course a great deal of emotion in the room. President Trump however did continue with the line which he has long held about increasing the level of security in schools and arming the teachers.

“That coach was very brave, saved a lot of lives, I suspect,” Mr. Trump said, referring to Aaron Feis, a coach at the school who reportedly died using his body as a shield to protect students. “But if he had a firearm, he wouldn’t have had to run, he would have shot and that would have been the end of it.”

Trump isn’t of course known for his ability to be tactful and whilst this probably wasn’t the best time to tell people that we need more guns, he did have a good point, that coach may still be a hero and still be around if he’d had a firearm on him.
Andrew Pollack emerged as a really strong voice from the meeting and as aTrump supporter he appeared to be looking to work with the administration to fix this issue once and for all.

“How many schools, how many children have to get shot? It stops here, with this administration and me, because I’m not going to sleep until it’s fixed.”

This is a sensitive subject of course and it is a debate which will rumble on, sadly this I fear that the debate will still be ongoing when the next school shooting happens, we simply have to take strong action, and like Mr. Pollock said, it stops here.
TagsgunsschoolsTrump
Share:
Previous Article

Dreamer Not Only Praises Trump, But Drops ...