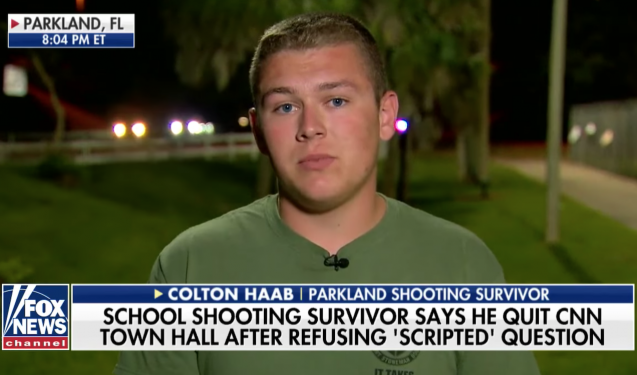 There are many networks who get involved in some shady stuff but CNN is by far and away one of the worst culprits for doing this and they may very well have bitten off more than they can chew. The video which we are about to show is from a survivor of the dreadful school shooting which took place in Parkland, FLA, a brave young man who refused to stand for any of the BS which CNN were trying to pull.

There was going to be a meeting in the local town hall with a debate between survivors and public officials about what can be done to stop this from happening again. CNN were front and center of this town hall event, but clearly they wanted to shape their own narrative.

It is absolutely mind blowing that a young man like this, confident and clearly pretty brave, was asked, or indicated, to completely change and reshape his question because CNN didn’t like the narrative it would push. Now this is a young man who believes that teachers should be armed and that is his view, he is entitled to that, but the hacks at CNN have tried to silence him.

I am not sure what it is about the town hall meeting that CNN wouldn’t want to cover, why wouldn’t a media outlet want a healthy debate around gun control or indeed arming teachers, what is it that they would be so scared of?

I am not always on the side of Fox and Tucker Carlson but I do have to say that I am so pleased that they were able to get this young man on in order to point out the disgusting and fascist way in which the new network have treated him, and his schoolmates who are still reeling from laying their friends to rest.

Shame on you CNN, spread this message wide and far, and let’s all hope that there are many more Colton Habbs in this world, horrendous from CNN.

Trump Orders Justice Department to Get To ...